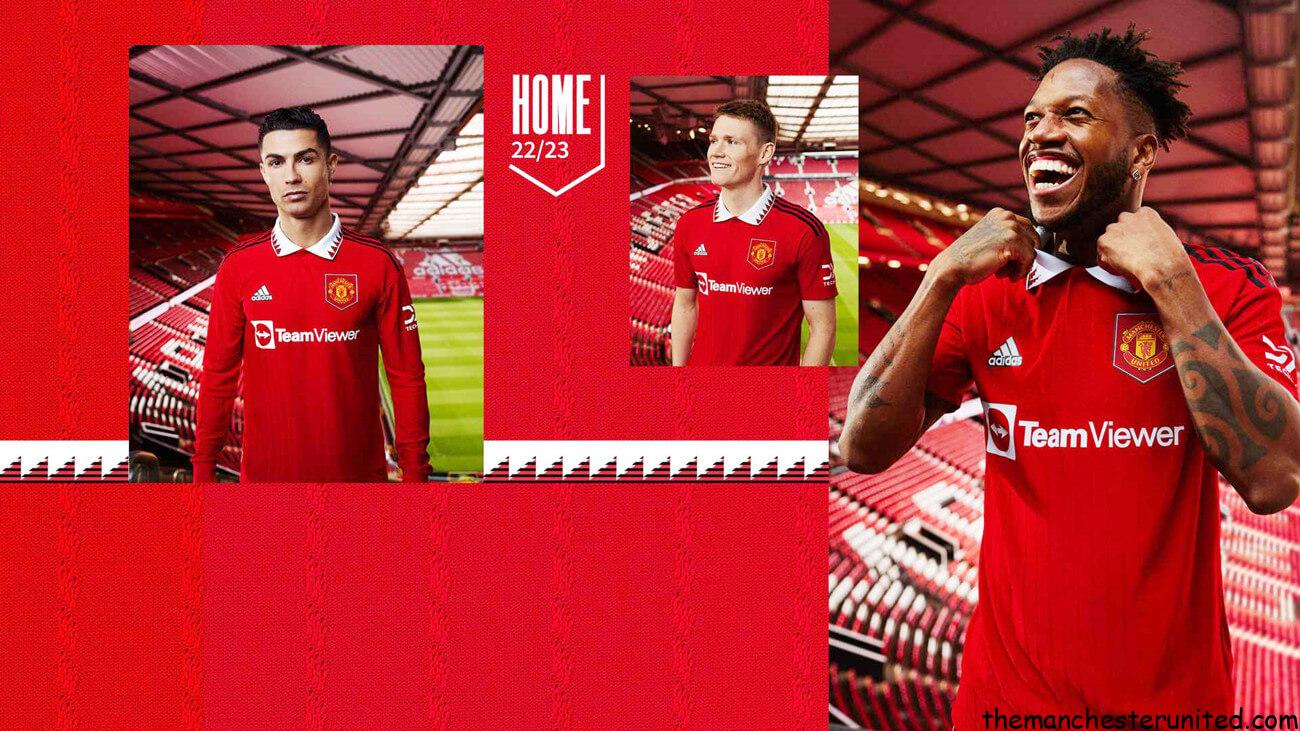 Manchester United have unveiled their new 2022-23 home kits for the upcoming season. It also sees a return for the polo collar for the first time since 2015 while the retro triangular pattern on the collar itself evokes throwbacks to the club’s classic 1990s attire.
The shirt is a delectable design that at once looks both retro and contemporary, with clean, understated lines accentuated by subtle flourishes in the trim and finish.

The new top is pure Manchester United – all red with a white single-button polo collar. Black adidas stripes on the shoulder and white TeamViewer and DXC Technology sponsor marks top off the overall look. Interestingly, the adidas logo is rendered in white with a black outline, usually we only see a makers’ mark in one color. This is a tiny detail that only jersey nerds like myself might notice, but it’s notable nonetheless.
Going beyond the basic colors, there is some nice detailing here. The shirt features a tonal dashed pinstripe pattern woven into the fabric of the shirt. The thread on the stripes has that bit of shimmer to it which when done right is always a pleasant effect, and that is the case here. On the collar, we have a geometric design of red triangles with black stripes, creating the impression of abstract ‘M’s wrapping around the neck.
The standard MUFC crest sits within a secondary “home plate” shield shape, a trick used at various times in United’s past. This creates a fresh visual effect in an area of the shirt which normally you’d expect to be exactly the same as the year before.

The description reads: “With performance, comfort, and the club’s heritage at the forefront of its design, the 2022/23 home shirt features a stylish patterned polo collar, which bears resemblance to some of the club’s most memorable kits throughout history.
“It’s also a subtle nod to some of our former greats, whose unique style on and off the pitch made their kit their own.”

Wantaway striker Cristiano Ronaldo, Bruno Fernandes, Scott McTominay and Alessia Russo are among the stars to model the kit, as well as club legend Eric Cantona, making good on the club’s claim that the shirt is “inspired by icons”.

The new home jersey will be worn for the first time on the pitch when Erik ten Hag‘s team play against Liverpool in Bangkok on Tuesday 12 July, live on MUTV