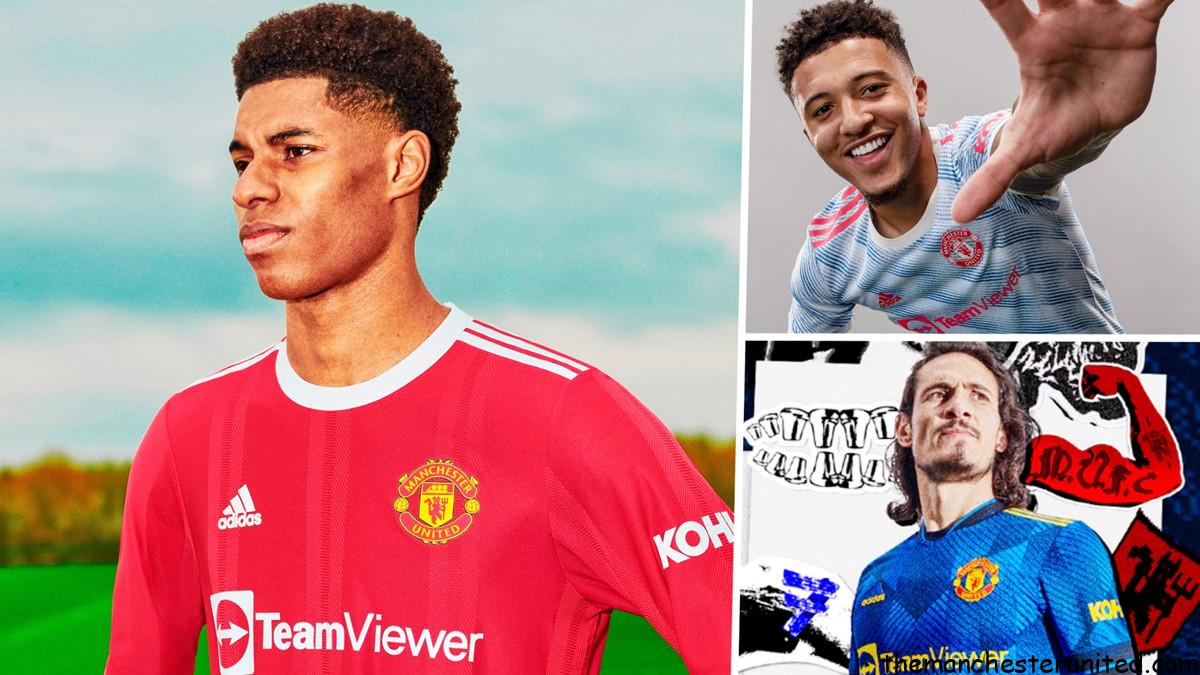 The 2021/22 season is the seventh season of Manchester United’s kit collaboration with adidas – and the Old Trafford fans want something stylish as they prepare for a Premier League title assault.

There is a big change in the design of Manchester United jersey 21/22, with TeamViewer replacing Chevrolet as the club’s chief jersey sponsor, so there is a fundamental change to the feel of United’s kits. Let’s take a look at what the Red Devils wear for the 2021/22 season.

The entire design of the Manchester United home kit 2021 22 is very clean and much different from the previous iteration. The only thing going on in terms of prints or graphic is a very subtle striping pattern that appears throughout the front, sleeves and back.

The design is inspired by the kits of the Sir Matt Busby era of the 1960s – the 1968 European Cup winners’ vintage in particular.

The accents on the Manchester United home kit 2021 22 are ‘cloud white’, which is slightly darker than regular white. It was used for Arsenal’s 20-21 away shirt. The color is used for the Adidas logo on the front, as well as the 3 Stripes on the shoulders. The collar, which is a bit broader than a regular crew-neck and the sleeve cuffs also have this color.

Manchester United’s 2021-22 away kit was launched on July 30, and it takes inspiration from the Red Devils away jersey worn between 1990 and 1992, which was also made by adidas. Unlike previously expected, the Manchester United 21-22 away jersey doesn’t include the classic Adidas ‘trefoil’ logo in the end, instead it has the contemporary brand symbol.

Diagonal blue and white with red insignia and adidas stripes, it is a modern take on the jersey worn in the early days of Sir Alex Ferguson’s tenure, which featured geometric patterns.

The Red Devils launched the kit with a poem from Dr John Cooper Clarke and it is intended to serve as a monument to the “power of youth”, according to the club’s official website.

Manchester United third kit 2021 22 was launched on August 12. The kit is predominantly dark blue with a subtle all-over pattern print in black, featuring subtle ‘M’s in a retro-inspired style.

The accents on Manchester United third kit 2021 22 are the adidas and TeamViewer logos – are done in an eye-catching yellow shade to contrast with the darkness of the base colors, rounded off with black shorts and yellow socks.

Which one’s your favorite out of the three United 2021-22 kits? You’re not content to simply cheer on your favorite football team. You want to dress the part of the ultimate fan. Support the squad with Manchester United kits for men, women and youth fans! Shop United home and away kits, as well as goalkeeper and third jerseys for the whole family. Wear the name and number of the MUFC elite with Cristiano Ronaldo, Marcus Rashford, Bruno Fernandes, Donny van de Beek, and Harry Maguire jerseys, or create a custom Manchester United jersey with your own name and number. Pick yours up today at Manchester United official sites or Amazon and enjoy the same look as your favorite superstars.